I started at Fata Morgana because I realized that the "fata" here must be the Italian word for fairy. We use the phrase in English now to mean a mirage, but originally "fata Morgana" is the Italian term for the sorceress sister of King Arthur. Apparently the English usage dates to 1818, and refers to an especially famous mirage at the Strait of Messina, hence our use of the Italian word.

That then led me to the Flying Dutchman, a famous legend which some people think might also be based on people seeing this type of sea mirage, and imagining that it is a ghost ship. The first reference to this legend in print dates to 1790. In 1881, Prince George of Wales (later King George) saw the ship while on a voyage off the coast of Australia: "July 11th. At 4 a.m. the Flying Dutchman crossed our bows. A strange red light as of a phantom ship all aglow..." There are so many books, movies, and songs based on this legend! It was hard to know what to choose next.

I decided to go with Richard Wagner's opera The Flying Dutchman. The story goes that the accursed captain's ghost ship comes to shore every seven years so he can seek a wife whose love will undo the Satanic curse. I'm not sure if this counts as a happy ending or not: when he has to go back to his ship, his loving bride throws herself into the sea, faithful unto death. This breaks the curse, so she and her husband both ascend to heaven. Illustration: 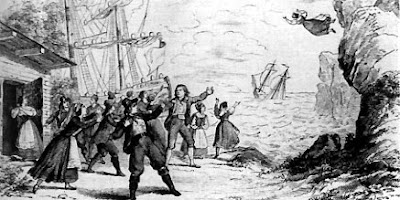 And since Wagner was inspired to tell his version after reading a story by Heinrich Heine which linked the Dutchman to the Wandering Jew, that's where I ended up. While the Dutchman was a ship, this shifts the focus to an accursed individual: in Wagner's opera, the hero is under a curse because he made an alliance with Satan, while the Wandering Jew is under a curse because he taunted Jesus on his way to crucifixion, and that curse condemns him to wander the earth until the Second Coming. In one version, he was apparently a doorman employed by Pontius Pilate! This article references back to the Flying Dutchman of Wagner: "There are clear echoes of the Wandering Jew in Wagner's The Flying Dutchman, whose plot line is adapted from a story by Heinrich Heine in which the Dutchman is referred to as the Wandering Jew of the ocean."