There are some great stories in here, but I know the one I want to work with is this one: The Foolish, Timid Rabbit. Story source: Jataka Tales by Ellen C. Babbitt. It's a chain tale, and I did my project last semester on chain tales (Chain Tale Anthology: One Thing Leads to Another). I won't be writing chain tales for my project this semester (although I did think about it...); instead, it will be Hanuman this semester. But I can start out with one last chain tale based on this jataka story.

I like the idea that in this version of the story, the monkeys apparently scare the poor rabbit on purpose (in the traditional jataka, it is just a ripe vilva fruit that falls on his head). This would make such a great fake-news story too, so maybe I will find a way to include it in my project. The animals included in the sequence here are: rabbit-deer-fox-elephant-lion, and I've read versions that contain even longer lists of animals than that. Of course it would work with humans too. And instead of running, they would be retweeting ha ha.

Just for my own reference here, I'll include this link to the versions of the story I've found elsewhere: ATU 20C. Animals Flee in Fear of the End of the World (TMI Z43: it's one of the stories that used to have a Z chain-tale classification in the old TMI but which has been moved to the animal folktales classification instead in the ATU). Of course a HUGE difference with the jataka version is that unlike the fox who eats the animals up, this lion educates them instead!

That could be another way to rewrite this jataka: instead of the wise lion at the end who enlightens the animals (Buddha's past life!), I could have a jackal eat them all (the jackal in India often plays the role of the European fox trickster). That would mean changing the animals, since rabbit-deer-fox-elephant-lion won't work as a chain if the jackal is going to eat them all; it would need to be something more like the chain of animals in Henny-Penny: Henny-penny, Cocky-locky, Ducky-daddles, Goosey-poosey, and Turkey-lurkey.

I also really like the illustration for this story, trying to show all the animals, even the big elephant, in a single image. Illustration by Ellsworth Young. 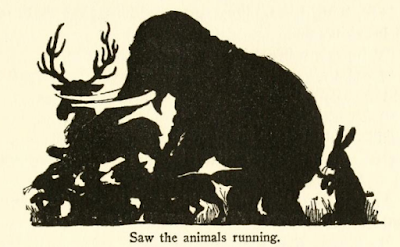