Week 3 Story: The Birth of Hanuman

The following story is a blend of different legends from India and also from Thailand about the birth of Hanuman; see the author's note below to learn more about the different pieces of the story.

THE BIRTH OF HANUMAN

The sage Gautama left the ashram early one morning to perform his ritual ablutions, while Ahalya stayed at home, preparing the day's food, and their little daughter Swaha played outside. Ahalya heard Gautama return, earlier than she expected. He invited her to their bed, which was also not what she expected. In the midst of their lovemaking — their passionate lovemaking — she realized that this must be one of the gods come to earth. In the guise of her husband. After their lovemaking, he left.

Ahalya said nothing to him of what had happened, and nine months later, she gave birth to a beautiful boy; his name was Vali. His eyes flashed like lightning, so Ahalya suspected he might be the son of Lord Indra, the storm god. But she did not know for sure. 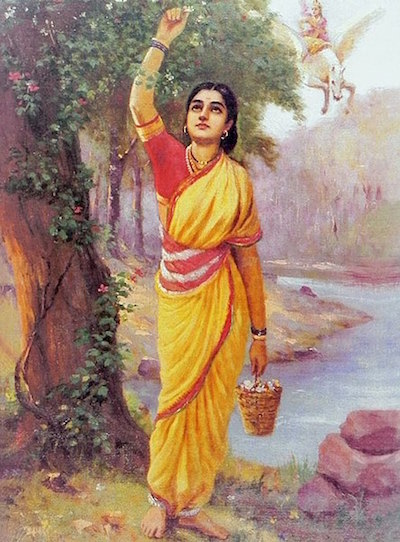 The same thing then happened all over again: a god came and visited Ahalya in disguise. She gave birth to another beautiful boy; his name was Sugriva. He glowed like the sun, so Ahalya thought he could be the son of Lord Surya, the sun god. Again, she said nothing to Gautama about this.

One day Gautama took Swaha, Vali, and Sugriva to bathe in the river. Gautama held little Vali with one hand while carrying Sugriva in the crook of his arm; Swaha had to walk by herself. When they reached the river, she said angrily, "You love those boys more than me, but they are not even your own sons!"

Gautama ordered her to explain, and Swaha told him about the strange things she had seen, men who looked like her father, but who were not her father, visiting her mother in the morning.

Gautama then shouted, "O Gods, I will cast these children into the water; let my own child come back to me, and let any child who is not mine turn into a monkey." With those words, he threw all three of the children into the river.

Swaha emerged immediately and took her father's hand. After a few moments, the two boys also emerged, but now they were monkeys, and they ran scampering away into the forest.

Gautama and Swaha then returned to the ashram. When Ahalya saw they were alone, she screamed, "Where is Vali? Where is Surgriva?"

Gautama shouted back at her, "You whore! You slut! I curse you now and forever: you will become stone. And when Lord Vishnu comes to fight the rakshasas, you will be one of the stones that he casts into the ocean as he builds a bridge to Lanka, and there you will remain until the end of time."

Before Gautama even stopped speaking, Ahalya felt the process begin: her feet were too heavy to move, and she sensed her whole body hardening.

Then she saw Swaha staring fixedly at her, and she realized what had happened. "You thoughtless girl," she moaned. "Because you have betrayed me, I curse you to stand on one foot atop Mount Kailash with your mouth open: your only food will be the wind that blows." She then heard the chatter of monkeys in the trees and looked up; she realized that those were her sons, so she added, "And may you give birth to a monkey child."

Those were the last words Ahalya ever spoke. The wind, summoned by her curse, blew through the ashram and snatched up Swaha, carrying her to the top of Mount Kailash. For years she stood there, feeding on the wind, in fulfillment of her mother's curse.

Eventually, Lord Shiva, who has his home on Mount Kailash, saw the beautiful Swaha and thought she might make a good mother for the strong and brave warrior that Lord Vishnu would need to lead his soldiers in the war on Lanka. So Lord Shiva summoned Lord Vayu, the wind-god, and told him to embrace Swaha there on the mountain top and conceive a child with her.

As the son of Vayu took shape inside Swaha, he had the body of a monkey in fulfillment of her mother's curse, while the gods bestowed their weapons upon the child as he grew: his backbone took shape from the bejeweled club of Lord Brahma, giving him strength; his head took shape from the whirling chakra of Lord Vishnu, giving him insight; and his limbs took shape from the radiant trident of Lord Shiva, making him beautiful. He could also summon this trident out of his body and wield it as a weapon when needed. And because he was the son of the wind-god, he had the power to fly and to expand or shrink in size, just like the wind, whenever he wanted. 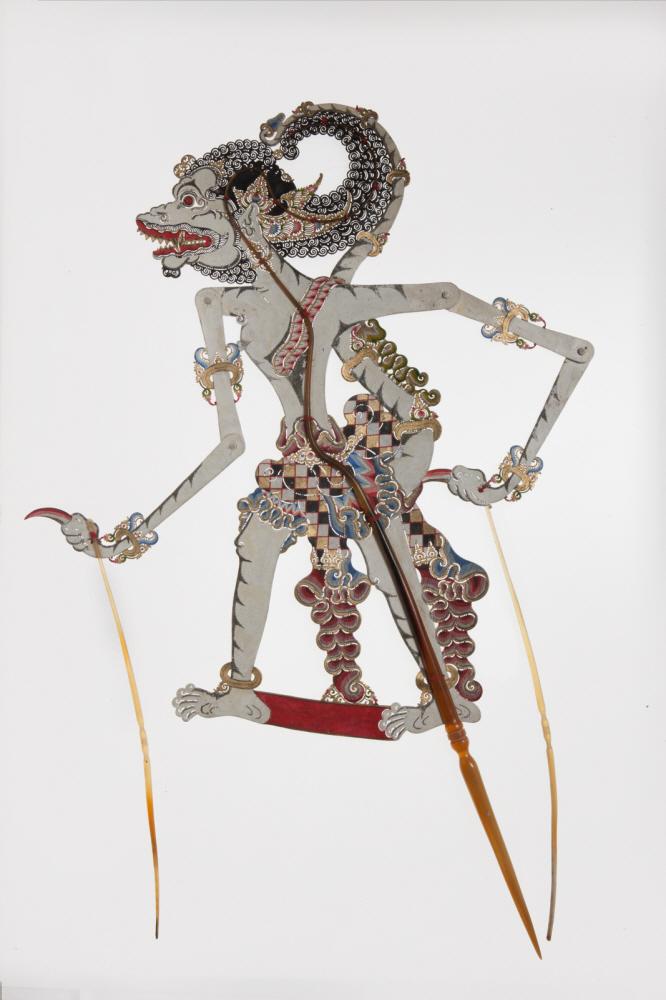 This was Hanuman. When he was born, he was covered all over with beautiful white fur, and his teeth were sparkling diamonds. He was a cosmic being, and with each breath, he could exhale moons and stars and planets. Vayu was pleased with Hanuman, so he prepared to take the child to meet Lord Shiva and begin his warrior training.

First, however, Hanuman went to his mother. She cradled him in her arms, kissing him and hugging him. She told Hanuman that he was born to command the soldiers of Lord Vishnu in his fight against the rakshasas when Vishnu came in human form upon the earth.

"How will I recognize Lord Vishnu?" Hanuman asked her. "And how will he recognize me?" 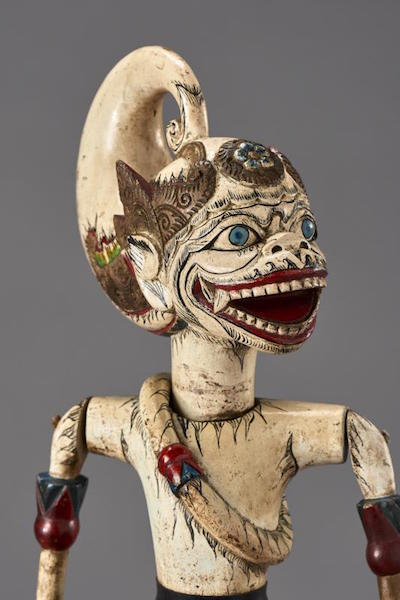 "He will be the only human who can see that your teeth are diamonds," Swaha explained. "And when he tells you that he can see your diamond teeth, then you will know that he is Lord Vishnu, and you will love him with all your heart."

Hanuman nodded, and gave his mother a final embrace. Swaha then began her long trek down from the top of the mountain, rejoining the world of women and men. Hanuman, meanwhile, ascended into heaven and frolicked in the gardens of the gods until it was his time to return once again to the earth. 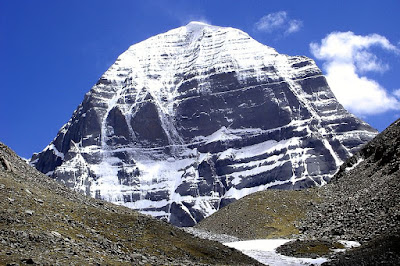 
Author's Notes. You might be very surprised to see this mash-up of the story of Ahalya, Gautama, and Lord Indra, as told in Valmiki's Ramayana, with the birth of Sugriva and Vali. That is not my idea, though! It is an old Indian legend. I first encountered it when I read Anand Neelakantan's novel, Vanara: The Legend of Baali, Sugreeva and Tara (highly recommended!). The Ahalya connection is also one of the stories that Philip Lutgendorf collects in Hanuman's Tale: The Messages of a Divine Monkey.

So I was very excited when I saw this legend appear in the Thai Ramakien which I chose for my reading for class this week (since I've read both Narayan and the PDE Ramayana, I wanted to do something different). Because there is not a good summary of the Ramakien online in English, I am taking very detailed notes while I read; you can see my notes here for chapters 10-11-12, which is the main source I used for this story: 10. The childless Kodom conjures a wife, 11. Kodom's sons are changed to monkeys, and 12. The birth of Hanuman.

The Sanskrit name Gautama has become "Kodom" in the Thai version, and Kodom's wife is called Adjana (like Anjana, Hanuman's mother), playing the role of Ahalya. The name Swaha is from the Thai version.

The curse that Kodom puts on his wife is really intense! In Valmiki's Ramayana, Ahalya awaits Rama as her liberator, releasing her from Gautama's curse. Here are two illustrations of that famous scene: 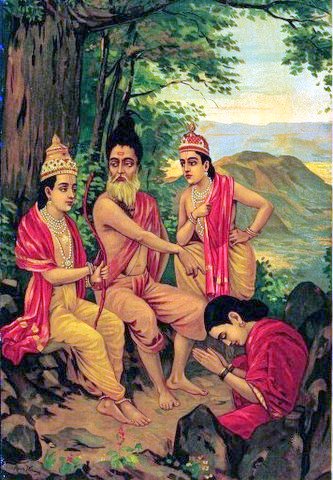 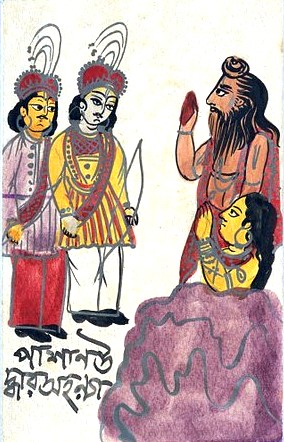 In the Ramakien version, however, there is no release for Ahalya. If anything, things will get worse when Rama arrives: she will be thrown into the bottom of the ocean forever.

Since Hanuman is going to be present during the building of the bridge, I am already thinking that he might have some awareness that his grandmother is there, and I might even have him save her from the stone somehow. Anyway, I haven't gotten to that part of the Ramakien yet, but for sure the building of the bridge will be important because that is part of how Hanuman becomes involved with Suvannamaccha, "Golden-Fish," his mermaid lover in the Thai version of the story. More about that later!

Bibliography. I am reading The Ramakien: A prose translation of the Thai Ramayana by Ray Olsson (published in Bangkok in 1968). It is the most detailed translation I have found, but it is in prose, not in verse. It is also hard to find; after much searching, I finally found a used copy that was just $30. The going price seems to be around $50 or $60. I wish UNESCO or some other cultural foundation would support an English translation of the Ramakien that could be published online for free for everyone to read! It is really remarkable, and I am enjoying it even more than I expected.

Here's something fun: my used copy of Olsson's Ramakien was once in the hands of someone in Kashmir; it has a book stamp in it from what appears to be a bookseller in Srinagar. I wonder what path it took from Kashmir to rural North Carolina where I live!