So the next stories I want to write for my Storybook are going to be about Hanuman's lover Suvannamaccha and then the story about Hanuman meeting their son Macchanu... but he doesn't know that is his son! I need to do some research, though, because in addition to the Ramakien version, I want to bring in any other material I can find. As usual, I'll start with Wikipedia:

Suvannamaccha. The Sanskrit name has altered a little bit, but not by much: Suvarna-Matsya is Golden-Fish. She is the daughter of Totsakan/Ravana. Ravana tells her to destroy the bridge to Lanka that Rama is building, so she and the other mermaids carry away the rocks. Hanuman finds out what is happening; she falls in love with Hanuman and has the mermaids return all the rocks. Later, she gives birth to their son: Macchanu. Apparently she is very popular in Thailand; Wikipedia says she appears in good luck charms and cloth streamers, like this: 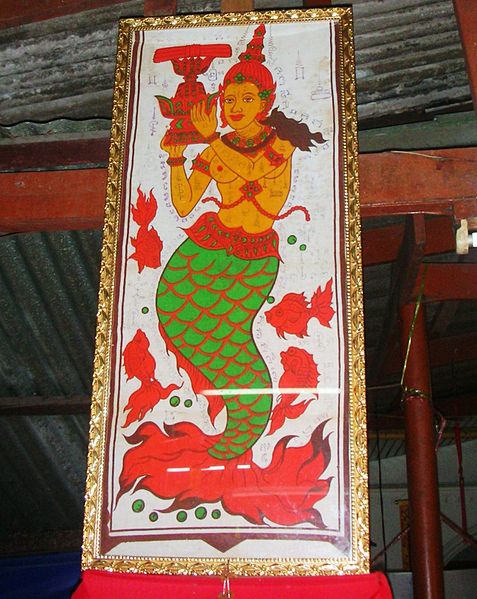 Macchanu. In some versions, Hanuman meets his son during a battle with Ravana's forces: Hanuman is fighting Macchanu (who is fish below, and vanara above), not knowing it is his son. A light appears in the sky, a golden star that announces this is his son. In other versions, this happens when Hanuman goes to the underworld domain of Maiyarap to rescue Rama and Lakshmana, and Macchanu is guarding a pond that he must cross. They fight, and it's a draw, so Hanuman asks this remarkable warrior who he is. Macchanu tells of his parentage, and Hanuman realizes it is his son. Macchanu does not want to betray his foster-father Maiyarap, so he gives Hanuman the information in the form of a riddle, not telling him directly what he needs to do to reach Rama, and so they part.

Makaradhwaja. When Hanuman washed in the sea, a drop of his sweat fell into the mouth of a makara, and Makaradhwaja was born (or else this happened after the burning of Lanka, when he was sweating from the heat and flew out over the sea): Makara-Dhwaja, Fish-Banner. Ahiravana caught the fish, found the baby (baby monkey apparently) inside, and adopted him, and he gave Makardhwaja the job of guarding his underworld kingdom. The story then proceeds as with Macchanu: Hanuman meets his son in the underworld kingdom, and is even more surprised to find out that he has a son since he was celeibate. But then he closes his eyes in meditation and has a vision of Makardhwaja's birth. After freeing Rama, Hanuman makes Makardhwaja the king of the underground kingdom that had belonged to Ahiravana. This is intriguing: "The Jethwa clan of Kshatriyas claim their descent from Makardhwaja." And so the Jethway dynasty of Gujarat had Hanuman on their royal flag to indicate this lineage. There are also  Makardhwaja temples in Gujarat (and in some, Hanuman is also worshiped, together with his son). This is a Markardhwaja statue in Gujarat: 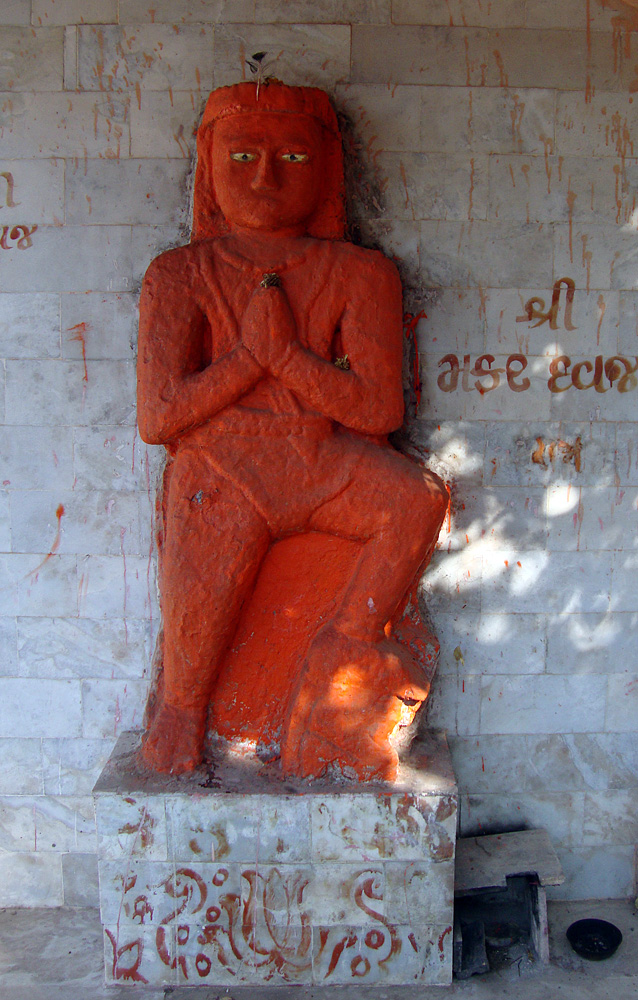 LUTGENDORF: treasure trove here! Because of the importance of Makardhwaja in India, he shows up in  Lutgendorf's Hanuman's Tale: The Messages of a Divine Monkey. There I learn that in some versions he is called instead Matsyaraja (Fish-king); this son tells Hanuman that when he coughed in the smoke from Lanka burning, a blob of phlegm fell into the ocean, where a fish swallowed it. In some versions of the story, Hanuman fights with his son and binds him; in other versions, the son tells him what he needs to know. Or the son can defeat him, but still let him go and tell him what he needs to know. Lutgendorf also mentions the importance of fish as a symbol of sexual potency, so that the dhwaja might not refer to the flag banner, but instead an erect flagstaff, and thus sexual potency embodied. If we imagine Hanuman's son as a monkey, it's almost like he gets nothing from his mother anyway; the makara was just a vehicle for the new Hanuman to grow (as opposed to a son of Suvannamaccha who is part monkey and part fish). There is a Tamil version where Hanuman's son is called Maccavallapa, Fish-Hero, and his motehr does have a name: Timiti. He links this to the Cambodian and Thai stories in which Hanuman met Golden Fish either on his flight to Lanka, or when building the bridge. In some versions to build the bridge, hanuman defeats the sea creatures by sexual conquest, but in the Malay version he uses his tail to stir up the water, forcing fish and crabs to come up where he and the monkey army eat them. The fish attacks on the bridge do show up in some Indian texts. There is tantalizing evidence from French and Portuguese summaries by travelers to INdia in the late 17th century where Hanuman made love to a crocodile woman (makari) when bathing in the ocean after burning Lanka. Lutgendorf also notes that it is sometimes a drop of saliva rather than sweat or phlegm which makes the son. He cites a modern Hindi version in which the fish lover is Savita, daughter of Varuna and sister of Lakshmi (who emerge from churning of the waters). Savita implores Shiva through austerities, but he has to refuse her (already married to Parvati), so she asks for a son like him: Shiva's own sweat, in his monkey form, will impregnate her. The mother gives birth under water to an "aquatic monkey," and when they meet Ahiravana down there, Makaradhwaja fights and bests him, whereupon Ahiravana makes him his guard. When the son meets father, Savita shows up and makes peace between them. Then there is an astounding story about the young Hanuman and Chitraratha, king of the gandharvas. I'm not even going to try to summarize that whole story (it is SO COOL), but it ends up with Hanuman meeting his rejected bride in the form of a tiny fish who asks him to at least give her a son. Finally, in the TV show Jai Veer Hanuman, Hanuman meets Matsyavallabha (beloved of fish) in Mayavati; they fight, but then he recognizes Hanuman's name. A woman then appears wearing a fish-shaped crown who calls Hanuman husband; she is a celestial who fell in love with Hanuman; Surya cursed her to become a makari, but a drop of Hanuman's sweat fell into her mouth. Then she helps her son and Hanuman defeat Mahiravana. All of Chapter 7 in Lutegendorf's book is really fascinating, tons of storywriting material too!