I was away in Austin for a week... and when I got back home on Tuesday, I had a mountain of work to do, but I was so excited when the weekend arrived and I got to get back to working on the Ramakien. I had no idea when I started this semester that I would become totally obsessed with the Ramakien, but that's what has happened. So, I wrote a story this week with some good Ramakien material -- Mandodari, The Frog Queen -- and I kept on taking more notes from the Ramakien; I've finished Part G, and there are four more parts to go. I might even finish the whole Ramakien by the time week 6 rolls around and it's time to start the Mahabharata; if not, I'll keep on using the extra credit reading to carry on with my Ramakien adventure!

I also set up the website for my Storybook! It's going to be hard to narrow down the Hanuman stories that I want to use, but right now I'm thinking it will be the birth story (that I wrote already), and then Suvannamaccha, then Maiyarap (a.k.a. Mahiravana), and finally Sahatsadecha. 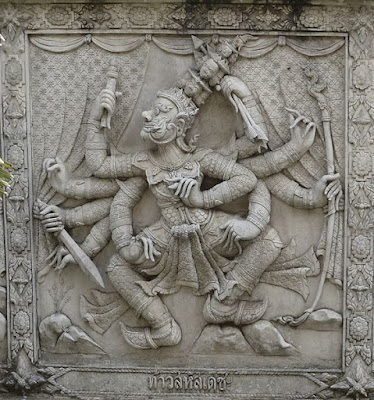 I am completely captivated by the way that Hanuman is portrayed in the Ramakien, and also how the focus shifts away from Rama to this whole huge cast of characters among his allies and also in the world of Tosakan (Ravana) and all his allies. From reading Lutgendorf's book, I understand that in some ways what I am finding here are the kinds of characters and episodes that show up in various south Indian and east Indian versions of the Ramayana, but Hanuman's amorous adventures go way beyond the stories told in those versions.

I wonder if I will get to go to Thailand someday to see a Khon theatrical performance. Wouldn't that be amazing? I'd always had a vague awareness of these south Asian artforms, but now I am completely captivated. When I get to reading the Mahabharata, I will definitely be exploring all the wayang puppet images to go with that too! I've been collecting lots of Hanuman puppet and mask images in a new Pinterest Board: