Breaking news: Brer Turtle beats Brer Rabbit in a race! You probably heard that one, right? Rabbit snoozes by the side of the road while Turtle just keeps on going: slow and steady wins the race! That's the version in Aesop anyway.

But that's not what really happened. Brer Turtle fooled Aesop good, just like he fooled the rabbit. And it sounds like maybe he fooled you too, so I'm here to fill you in on the actual events.

Of course, you know that Brer Rabbit and Brer Turtle are both pretty smart. Dangerous smart. When the two of them get together, you better watch out: the two of them all but drowned Brer Fox and Brer Wolf and Brer Bear in the deep end of the pond (details), and then there was the time they got Brer Fox to poke his head in a hornet nest (details), plus the incident with the steeple when Brer Wolf got all his fur boiled off (details)... suffice to say: when Brer Rabbit and Brer Turtle put their heads together, something bad is bound to happen to somebody.

But when they go head to head against each other, well, that's a different story.

It all started with Brer Rabbit and Brer Turtle bragging and boasting, as they both like to do.

"You're quick-witted," Brer Rabbit said to Brer Turtle, "I'll give you that. But you've got to admit: I'm fast on my feet." 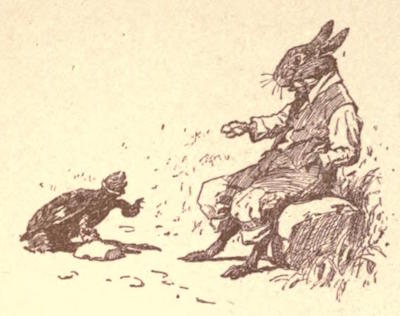 (illustration by A. B. Frost)

"Well," said Brer Turtle slowly, "that may be, but I could still beat you in a race. No doubt. No doubt."

But Brer Turtle persisted. "I'll prove it," he declared. "A week from today. Five miles down the Sweetwater Road. You follow the road, and I'll follow the creek bed that runs alongside it. I need to feel the mud between my toes. Fifty dollars, plus bragging rights, to the winner. Is it a bet?"

Brer Rabbit leaped in the air and wiggled his ears. "You've got a bet, my friend Turtle. And make sure you have the fifty dollars on you; I'll be there to collect it at the finish line."

"And the same to you," said Brer Turtle. "You better be ready to show me the money."

Brer Rabbit then hopped off to do some wind sprints, tempo runs, and fartleks to get ready for the race.

Brer Turtle, meanwhile, had other plans. He hurried on home, fast as a turtle can hurry anyway, and called all his turtle friends and relatives together.

"Turtles," he said, "I need your help. There's fifty dollars and my reputation on the line. I need five of you to help me win this race, so that's ten dollars each for your reward. Brer Rabbit can't tell the difference between one turtle and another, so here's what we're going to do..." 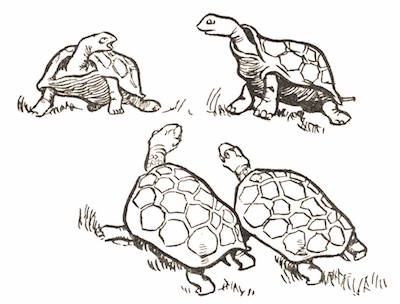 Have you figured his plan out yet? Read on to find out how it all went down.

On the day of the race, right at dawn, the turtles took their positions: there was Brer Turtle's two cousins, his brother-in-law, and his next-door neighbor at mile-markers one, two, three, and four, with Brer Turtle himself lying in wait at the finish line. Meanwhile, it was Granddad Turtle who showed up at the start of the race, grinning at Brer Rabbit but not saying a word, just in case the rabbit might hear a quaver in the old turtle's voice.

BANG went the starting gun, and away they went, with the turtle crawling down into the creek bed to make his way through the mud, and the rabbit racing off down the dirt road.

As Brer Rabbit neared that first mile-marker, he called out, "Turtle Turtle Turtle, where are you?" He didn't expect any response, of course, thinking he had left the turtle far behind... so imagine his surprise when he saw the turtle's head poking up out of the weeds on the side of the road. The turtle grinned right at him, and then plunged back down into the muddy creek bed. Baffled, Brer Rabbit shook his head and picked up his speed on the way to the next mile-marker.

Where the same thing happened again.

Brer Rabbit ran the next mile at break-neck speed, only to find that the turtle had beaten him to that mile-marker too.

And again at the fourth mile-marker.

The poor rabbit used every last ounce of strength racing that final mile, his ears laid back flat, his tongue lolling out, his feet burning from the heat of the road.

But when he reached the finish line, what did he see? It was Brer Turtle doing a victory dance, waving his stubby turtle arms in the air. Brer Rabbit couldn't believe it.

And that's how Brer Turtle beat Brer Rabbit in the race.

Is there a moral to this story? Aesop sure does like those morals, so I guess I could offer this piece of advice: if you can't tell the difference between one turtle and another, more fool you — and you best not go racing with turtles.

Bibliography. This story was inspired by "The Hare and the Tortoise" from The Fables of Aesop by Joseph Jacobs (1894) and "Mr. Rabbit Finds His Match at Last" from Uncle Remus, His Songs and His Sayings by Joel Chandler Harris (1880).

Author's Note. Like last time (Week 2 story), it was not my idea to retell this Aesop's fable about the tortoise and the hare with Brer Turtle and Brer Rabbit; I got the idea from the African American folktale tradition (see more bibliography here). This story about the trickster turtle and rabbit is another one of the stories that the slaves brought with them from Africa, and stories about the "substitute relay race" can be found in many African storytelling traditions. Here is one example from South Africa: Hare and Tortoise. Sometimes there are other animals racing but with the same type of trick, like this story from Sierra Leone in west Africa: The Deer and the Snail.

There are also a few European stories which also feature a substitute trick in a race, like this story from The Brothers Grimm: The Hare and the Hedgehog.

So, while the Aesopic fable about "slow and steady wins the race" is very inspiring and all, the more popular story around the whole world is this story about the underdog tricksters who use their wits to make up for what they lack in speed.