The Creation of Kali. Technically this was a project for the Myth-Folklore class, but it was on an Indian topic, and it was also just fantastic: no one has ever done a Kali project for either class before, and the focus on different stories about the creation of Kali was so cool. My favorite was the story where we got to see Shiva and Parvati at the moment that Parvati herself emanated as Kali, and Kali herself, in her pre-existence, is listening to their conversation. WOW. I am really fascinated by the warrior manifestations of Parvati as Kali, Durga, etc., and I'm hoping somehow to make those goddess stories part of the project I do for class this semester, although I haven't quite figured out how I will do that. Here's a gorgeous illustration showing Kali defeating Raktabija: 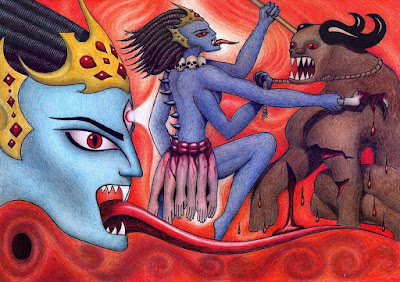 (by lizard-mantidae at Deviant Art)

Tales of the Divine Bow. There is so much good Shiva dialogue in this Storybook also, which is why I picked it. Shiva is actually a really important character in his own way in both epics, especially in the Mahabharata... and in this Storybook we get to see Rama having an intense meeting with Shiva as a result of all the goings-on with the bow Pinaka at Sita's swayamvara. Plus, Pinaka is also a speaking character in this story, chatting with Shiva. There are some unforgettable scenes here. And lots of Sita action too. It's all good!

Karma: The Good Place. There are lots of Storybook projects based on TV adaptations, but I've never seen one quite like this where all the characters are coming from the epics, with just the idea of the TV show being used to shape the project. It turned out brilliantly! The ending of the Mahabharata is something that can be kind of weird and confusing, and in this project we get to live through that weirdness and confusion together with the characters themselves. And Yudhishthira turns out to be such a great hero in this project too, which is something I really appreciated. (I am a Yudhishthira fan; yes, he has his faults, but he's a character who really improves over time, learning from his terrible mistakes.)

I'm pretty much totally obsessed with my 100-word-story project from over the winter break, so somehow or other I want to do a 100-word-story type of project for this class. Maybe a Portfolio of tiny stories about the goddesses and gods...? That sure sounds appealing: there are plenty of gods and goddesses in the epics themselves, and then I could also include stories from beyond the epics like stories about Parvati, Durga, Kali, etc. :-)