31. Swarms of crows attack the hermits. Totsakan gets help from evil goddess Ka Kanasoon and her crows to attack the hermits of Ayutaya, fearing their power. Hermits ask for help from Wasit and Swamit: the answer is Tosarot's sons will defend hermits from crows. Ram and Lak fight the crows, and Ram kills Kanasoon.

32. The battle with the flying horses. Demons Swahu and Mareet enraged at mother's death. They attack Lak and Ram on flying horses; Ram manifests as Narai and kills Swahu; Mareet flees to Longka.

33. King Chanok comes home with his lotus-daughter. After 16 years, Chanok wants to dig his lotus-daughter out of the ground, but they cannot find the urn. He asks that Usuparat, Isuan's bull, help him plow. Nang Sida emerges from the ground. Chanok sets a marriage contest with the Maha Molee bow.Swami and Wasit brought Ram and Lak there to try. Love at first sight for Ram and Sida. Lak could draw the bow, but he pretended otherwise, knowing Ram loved Sida. Ram drew the bow and won Sida as his wife.

34. The marriage of Pra Ram and Nang Sida. Totsarot and all his family come for the wedding, with Sutamantan conducting the ceremony. Very sweet description of their wedding night. Then: "All she had known before was forgotten. Henceforth, only the love for her husband was important."

35. Pra Ram conquers Ramasoon. Totsarot returned home with the bride and groom; Ramasoon with his axe challenged them: "You beetles, what are you doing in my forest?" Ram reveals himself as Narai, come to kill the demons, and Ramasoon declares himself as "come from heaven to kill the killers." Ram's first arrows miss but then Ram strikes Ramasoon with his bow, and Ramasoon begs for mercy. He gives Ram the club that belonged to Isuan's nephew Treemek. Ram entrusts the club to the rain-god Piroon.

36. The exile of Sukreep. Bull Torapee matched hoofprints with those of his father Torapa and vowed to kill him. He wounds Torapa and took all his father's wives for himself. Isuan cursed him, saying a monkey would kill Torapee and then he would be reborn as Mangkonkan, son of Khorn, brother of Totsakan, whom Ram would kill Torapee challenge Palee to fight, and Palee feared the bull's strength, so he proposed they go fight away from the city inside a cave. He tells Sukreep to watch for the blood: if red, Palee is dead. Palee and Torapee fought in the cave for a week; when Torapee boasted his horns were his strength, his six protective spirits flew away and Palee killed him. The rain dilutes the blood and makes it look red; Sukreep seals the cave. Palee breaks out, furious, and sent Sukreep into exile. Hanuman felt sorry for his uncle, and he proposed that they meditate together.

37. Pra Ram leaves Ayutaya. Totsarot plans to make Ram king. Kudjee urges Kaiyakesee to exile Ram and make Prot king. She uses the boon Tosarot had promised. Ram is glad to go live with the hermits and fight demons. Lak and Nang Sida want to go too. When they leave, Totsarot holds his breath until he dies.

38. The journey through the forest. They reach a river, Satong, and meet King Khukhan of the hunters. He also meets hermits and finally journeys to Mount Satakoot.

39. The funeral of King Totsarot. Prot and Satrud return to Ayutaya and learn of the exile and Tosarot's death. Prot is ready to stab Kaiyakesee with his sword, but Satrud takes the blow instead. Prot then follows after Ram to bring him back. Ram wants to stay, his family beg him to go home, then "the angels on Mount Satakoot made themselves visible and told the brothers that Pra Ram must stay to destroy the demons." He gives Prot his straw sandals to put on the throne.

40. The battle with the demon Pirap. Ram meets King Sutat, who dreamed he was coming. He receives a boat from the angle Pra Sai Tewet to cross the Amarut River. Then they were in Pirap's kingdom. Sida ate a golden apple from his garden; the watchman was furious. Lak killed the watchman; Pirap found out. He grabbed Sida. Ram fights Pirap and defeats him. He rescues Saowaree from her fiery punishment. The meet Akkot, the hermit who has Isuan's golden armor from the battle with Treeburam, and he gives the armor to Ram. They rest at the Kotawaree River.

41. Pra Lak kills Kumpakat. Kumpakat used incantations to get Pra Prohm to give him a sword to cut Heaven and Earth into quarters. Isuan was angry at his insolence and instead of giving him the sword, he stuck it in the ground. Lak found it. Kumpakat emerged from trance state, and Lak killed him with the sword.

42. Totsakan kills Chiuha Yak. Totsakan told his nephew Chiuha to guard Longka. But Chiuha fell asleep: "He stuck his gigantic tongue far out into the sky over Longka and fell asleep. Thus hidden under his tongue, the city was invisible." Totsakan was angry when he could not find the city; he threw his discus in the air and it cut through the tongue and Chiuha drowned in his own blood. Samanakha was furious that her husband was dead. Totsakan apologizes. Samanakha goes looking for a new husband. She fell in love with Ram and changed her form to that of a beautiful woman to seduce him. Ram rejects her and in a rage she decides to kill Sida. When she sees Lak, she lusts after him too and wants them both. But "the brothers cut off her hands and feet and her nose, lips and ears. Blood streamed from her as she panted and groaned through the forest on the stumps of her limbs." She went to Romakan, home of her brother, King Khorn.

43. Totsakan's brothers Khorn, Toot, and Treesian are killed. Khorn attacks Ram, and Ram kills him, Toot then attacks, making himself invisible, but Ram kills him too. Treesian then attacks and Ram kills him also. Samanakha tells Totsakan about their deaths: "When he was gold, his ten sets of teeth gnashed, his ten pairs of eyes spit fire, and his ten mouths snarled. He furiously organized an avenging army. With on ehand he held his bow, and with another his sword. A third hand held the discus, the fourth a spear, the fifth his trident, the sixth his club, the seventh a curved sword, the eighth a teakwood hammer, the ninth a javelin, and the tenth a pike. Thus he sat, a picture of terror, on his throne."

44. Samanakha goads Totsakan to revenge. Samanakha tells Totsakan she was going to steal Sida for him, but then the men attacked her. The gods give Totsakan a sign by killing two sparrows as they lustfully mate, but Totsakan cannot help himself. He plots with Mareet, and Mareet fears the name of Ram.

45. Nang Sida is lured by a golden deer. Mareet as deer lures Rama away, then cries in Rama's voice and Sita makes Lak go follow him: "The Angels' saw with horror that Sida was alone, with the king of the demons lurking nearby. But they did not go down to warn Sida, for they were too afraid of Tosakan."

46. Totsakan abducts Nang Sida. Part of this is in verse; I wish there were a verse translation of the whole Ramakien! Totsakan transforms into a hermit. He then reveals himself and kidnaps her. Sadayu is on verge of victory when he causes his own demise: "This is your end, traitor-king! Although I can kill you, I am not as deadly as Pra Isuan's ring on Nang Sida's finger!" ... so Totsakan grabs the ring, hurls it at Sadayu, and it shatters him. He vows to stay alive to speak to Ram. Sida drops a kerchief to a monkey-mother nursing her baby, telling her to give it to Ram. 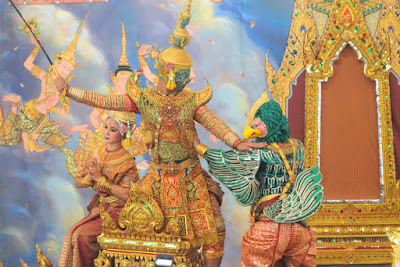