47. Pra Ram in pusuit. The brothers faint when they come back and find Sida gone. Indra brings rain to revive them and tellsthem to head southwest. They talked with Sadayu before he died, and then gave him a funeral. The met the demon Kumpon, the Snatcher, in the forest, punished by Isuan until Ram releases him. Kumpon tells Ram to gather monkey armies. Ram then kills him so that he can be reborn on Mount Krailat.

48. The demoness Atsamukhee tries to seduce Pra Lak. Atsamukhee abducts Lak, but Lak fights back. He and Ram let her go.

49. Pra Ram meets Hanuman. When Hanuman first sees Ram, he turns himself into a small white monkey and teases Lak. Ram realized the monkey must be a god; Lak could not see these things. Hanuman remembered his mother's prophecy. Ram petted Hanuman's back, restoring his strength. They go to Sukreep and Ram agrees to kill Palee.

50. The death of Palee. Sukreep bathes in water that washed Ram's arrows as protection. Palee throws Sukpree to top of Mount Djakrawan in first bout. Sukreep wears white cloth wrapped around wrist so Ram can see who to shoot. Palee tells Ram, dressed as hermit, to go away. Ram reminds him about what Narai said about Kaeo Dara: "if you did not deliver the maiden pure and untouched, you would fall by our arrow." Ram offers to Palee to give just a drop of blood, but Palee refuses: "I was born as a noble warrior and even though I must die, my honor requires that I fulfill every condition of this decree." He kills himself! "Then he plunged Prohmat into himself and his soul rose up to live in Paradise." They give Palee a funeral as for Sadayu, with the magic of Ram's arrows conducting the ceremony. Sukreep was finally able to take Kaeo Dara as his wife.

51. Sukreep is King of the monkeys. Ram speaks with peacock who saw Sida abducted, and he recovers the handkerchief. Indra builds them a palace and tells them to become kings again before they go fight. In forest, Hanuman meets Totsakan's general Rootarakan, and Hanuman fights him and all his demons. Not a single one lived to carry back a report to Totsakan.

52. The embassy to the great Chompoo. Sukreep fears the red monkey king Chompoo will want to avenge Palee. They send an embassy, but Chompoo does not believe Ram-Narai is Sukreep's ally. While Chompoo sleeps, Hanuman carries him away to by magic to Ram. Chompoo recognizes Narai and offers his army. His foster-son Nilapat disguised himself as a golden fly and came to Chompoo, whispering to him that these were his enemies, but Chompoo explained this was Pra Narai. Nilapat regains his monkey form; Lak is impressed. Chompoo is old, though, and will not go to battle. Ongkot is general of Kheet Khin army, and Nilapat general of Chompoo army, with Sukreep monkey commander-in-chief. They are ready to march to Longka!

53. A reconnaissance to Longka. Sukreep sends out Hanuman, Ongkot and Chompoopan to Longka, with Sadayu's ring and the kerchief as signs. Hanuman said a demon could find the objects, so Ram told him about falling in love at first sight. They defeat three cloud giants and come to the sleep-inducing Khoranee pond where Paglan Yak lived, being punished by Indra. He attacks the monkeys, but when he learns they are Narai's soldiers, he yields so that they can kill him and release him from his punishment. 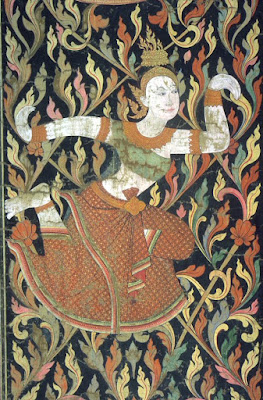 54. Hanuman frees two heavenly sisters. Hanuman meets maiden Butsamalee punished to live on earth until meeting Hanuman. He manifests his true form and she becomes a heavenly maiden, and then they make love. She sends the monkeys on to her sister Suwanna Malee. 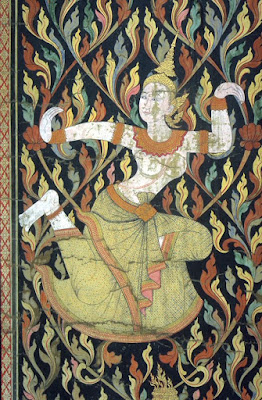 She then sends them to hermit Chadin Rusee. Hanuman enlarges himself and his tail as bridge across river so monkeys can cross.

55. The heavenly bird Sampatee carries Hanuman to Longka. Sampatee tells the story of how he lost his feathers and now, after he meets Narai's soldiers, his fathers grow back. He flies the monkeys to Kanta Singkhorn in the middle of the ocean; he leaves Hanuman there and takes other monkeys back. Hanuman flew to Longka, and met Pheesua Samut, the Ocean Butterfly ogress. He flew in her mouth and out her ear and back again, and then into her belly where he slashed her and killed her.

56. Hanuman breaks into Longka. Hanuman lands in Longka and meets the hermit Narot. The hermit taunts him, so Hanuman tricks him by growing larger and larger so that his garden house cannot hold him. The hermit creates a supernatural leech that will catch Hanuman when he bathes. Hanuman was scared, so the hermit freed him, and Hanuman apologized. Hanuman then fought with and defeated Longka's protective spirit. He put the island's inhabitants to sleep and sought Sida. He can't find her, returns to Narot, and Narot tells him that Sida is in pleasure garden.

57. Hanuman searches for Nang Sida. Hanuman finds Sida and watches as she curses Totsakan's advances. He wants to kill Totsakan, but Ram sent him to spy, not fight. Leaving, Totsakan tells the guards to make her change her mind or he will kill them! Sida makes a noose and prepares to hang herself. 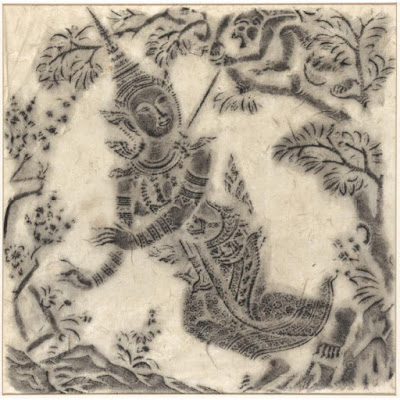 Hanuman unties the noose. She thinks he is an agent of Totsakan, preventing her suicide. Hanuman persuades her, and offers to carry her away. She says that Narai should come and kill the demons: "Without revenge there is no victory."

58. Hanuman is captured. Hanuman fights the Longka demons, killing all one thousand of the Sahatsa Kuman, Totsakan's seven-faced sons. Totsakan sent Intorachit to fight the little white monkey. He used the Nakabat snake-arrow to bind Hanuman, and Hanuman let himself be captured.

59. Hanuman burns down Longka. Totsakan orders his soldiers to kill Hanuman, but their weapons won't work. Totsakan puts him in the elephant corral with Banlai Djakawan, but Hanuman slits the elephant open. Hanuman then tells Totsakan that only one thing in the world can kill him: fire. Totsakan is fooled into pouring oil over Hanuman and setting him on fire with the spark of a diamond spear. Hanuman then ran through the palace, burning it, but he led Nang Monto and Kala Akee to safety. Totsakan takes wives in the Butsabok chariot and flies to the mountains. Longka city burns. Hanuman plunges in ocean to put out the fire, but tip of his tail is still burning from the diamond spear spark so he goes to Narot for help. Narot gives him a riddle: "The tip of your tail will burn forever unless you place it in the smallest well." Hanuman puts it in his mouth and that works.