60. Totsakan's nightmares. Totsakan rebuilds Longka with the helps of the gods, who fear him. Ram rebukes Hanuman for burning the city, fearing Totsakan will take revenge on Sida, but Hanuman explains Totsakan has no idea the wild monkey had anything to do with Ram. Still, he is ready to accept death as punishment; the other soldiers beg Ram to spare him. Pipek interprets Totsakan's dreams as omens of his defeat by Ram and tells him to give Sida back. Totsakan is outraged and threatens to kill Pipek. He makes Pipek's wife Treechada a slave and sends her to guard Sida, and he makes Pipek's daughter Benjakai one of his whores. Exiled, Pipek goes to Ram. Sukreep vows friendship as they are united by brother troubles. The monkeys trained and tested their strength by capturing the Serpent King of Badan, an some by capturing Pla Anon at the bottom of the ocean.

61. Sukasarn comes as a spy to the monkey camp. Totsakan sends Sukasarn, half-dog half-pig, out as spy. Sukasarn takes falcon form and flies over monkey army, and then he infiltrates army in monkey form. Pipek recognized him. Hanuman made himself huge, letting monkeys out from under his hand one by one, sure to catch the demon who would cast no shadow and whose eyes did not blink. Hanuman caught Sukasarn and beat him, and then sent him back to Longka. Sukasarn told Totsakan he had seen Pipek in Ram's camp.

62. Totsakan the spy. Totsakan disguised himself as a hermit. He cast a spell that would silence Pipek. He went to Ram and reported that Sida had become Totsakan's wife, but Ram does not believe him. He then says Pipek is a traitor. He then left before the spell wore off; when he was gone, Pipek was able to speak and told Ram that had been Totsakan.

63. Benjakai changes herself into Nang Sida. Totsakan tells Benjakai her father can come home if she will pretend to be Sida, appearing to have drowned. Banjakai persuades Sida to accept her as her handmaid and so learned how to copy her. She was able to fool Totsakan. They go through with the plan, and Ram is devastated when he finds Sida's body. He blames Hanuman again, but Hanuman sees through the trick and proposes they cremate the body. Benjakai confesses, and Pipek says she must die but Ram spares her to send her back to Longka. Hanuman carried her back to Longka, and made love to her along the way.

64. Hanuman and Nilapat quarrel. They begin to build the bridge. Nilapat still resents Hanuman for kidnapping Chompoo in his sleep. He hurled a whole mountain at Hanuman in the water; Hanuman barely escaped. Hanuman then threw a mountain at Nilapat. Then they fought. Ram was angry and ordered that they both be killed. Sukreep intervened, and Ram sent Nilapat back to Kheet Khin, while he told Hanuman to build the bridge in seven days or die.

65. Hanuman begets a son of a mermaid. Totsakan saw the bridge being built and told Supanna Matcha, his fish daughter, to get the fish to drag the stones away. Hanuman investigates and finds Supanna Matcha beneath the water. He fell in love; she gives birth to a son like Hanuman but with a fish tail. His name is Matchanu. Fearing Totsakan, she leaves the child on the beach: "Your father is the great Hanuman. He has teeth of jewels and sparkling fur. He can fly. When he yawns, stars fly out of his mouth. If you meet him, kneel in the dust." Maiyarap, son of Maha Yom Yak, ruled an underground kingdom. He had a dream telling him of a son, and he went searching; he found Matchanu. Maiyarap took the monkey-fish to Badan as his foster son and makes him a guard of the kingdom.

66. The first battle on the island of Longka. The monkeys array themselves in dragon-shape and Ram rides Indra's chariot. Totsakan has the monster Panurat disguise himself as a garden at the end of the bridge. Rama's angel Prakontan is fooled, but Hanuman realizes this garden is some kind of demon magic; Hanuman brought Panurat's head to Ram, and Ram threw Prakontan out of the camp. Pipek recommends they kill the demon Kumpasoon and camp at his home on Mount Morakot; Hanuman beheads the demon. They debate a surprise attack or whether to send emissaries, and Ram decides emissaries are more dignified.

67. Ongkot goes to Longka as a messenger. Ram sends Ongkot. Totsakan recognizes him as the son of Palee; he hates them both, but Ongkot is Monto's son, so he welcomes him with a feast. Monto was afraid for her son. Ongkot sat on an enormous seat made from his own tail and humiliated Totsakan, but Totsakan is defiant. He claims Sida came with him willingly. They trade insults, and then Krut helps Ongkot escape. On the way out, he broke the four-faced statue of god Prohm and hurled it at Totsakan's feet, saying that Totsakan's head would also be cut off. 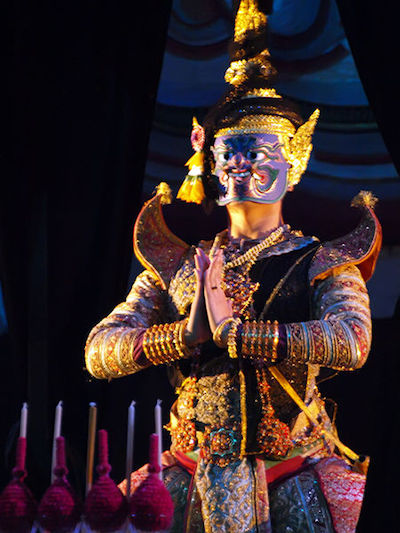 69. Maiyarap kidnaps Pra Ram. Totsakan tells Maiyarap that he needs help, but his mother, Djantaraprapa, doesn't want him to go. Maiyarap angrily rejects her advice. He goes to Totsakan who urgeshim to hypnotize Ram's army, kidnap Ram, and kill him. Maiyarap returns to Badan and prepares his magic in an elaborate ceremony. Ram has dream, so they set guards to watch all night. Hanuman hid Ram, Lak, and Pipek in his mouth, and he circles the camp with his tail. The light of Maiyarap's magic diamond fools monkey guards into thinking it is dawn. They let down their guard, and Maiyarap gets close enough to use his sleeping powder. He kidnaps Ram out of Hanuman's mouth, and Pirakuan his sister and her son Waiyawik prepare the magic water in which they will cook Ram the next day.

70. Hanuman breaks into the Underworld. Hanuman finds a lotus with a door to the underworld. Hanuman defeats all the weird creatures that guard Badan. He meets Matchanu who guards the lotus pond, who attacks him. As they fight, Hanuman asks who he is, and Matchanu says he is son of Hanuman. Hanuman is delighted, but Matchanu does not believe him, so Hanuman breathes out stars. Matchanu wants to help Hanuman but not to betray his foster father so when Hanuman asks which way to go, Matchanu just says: "The way you came." Hanuman then swims across the pond. 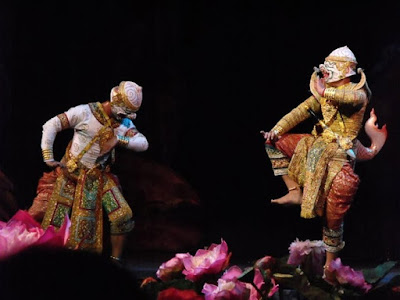 
71. Hanuman frees Pra Ram and kills Maiyarap. Hanuman overhears Pirakuan; he reveals himself and offers to make her son Waiyawik king if she will help him. She smuggles Hanuman in as a thread in her clothing. But Hanuman still weighs as much as before, so she fails the scale test. She protests the scales are old and broken, and they let her pass. Hanuman put Ram's guards to sleep, opened the cage with magic, and took the sleeping Ram away to Mount Surakan. Then he came back for Maiyarap. They fight using force and magic. Pirakuan reveals that her brother's soul is a bee in a palm tree on Mount Treekoot. Hanuman grew big enough to reach the mountain, grabbed the bee, and squashed it as he cut off Maiyarap's head. He made Waiyawik king in Badan, with Matchanu as vice-king. He brought back the sleeping Ram to camp, and when Ram woke, he remembered nothing of what had happened. Hanuman shows him Maiyarap's head and Ram is amazed. He makes Hanuman King of Ayutaya and gives him a nine-stoned ring.