83. Intorachit attempts a diversion. Totsakan learns that Ram and Lak are alive. Intorachit proposes they release Sukhadjan from prison (awaiting execution for cowardice) and transform him into a replica of Sida; he will behead Sida and throw her head to the monkeys. Intorachit taunts Lak on the battlefield, and the pretend Sida wails. Intorachit beheads her. Pipek used a horoscope to learn that the head Ram holds in his hands is not really Sida's.

84. Pra Lak pursues Intorachit. Pipek knows Intorachit is planning a seven-day spell to make himself immortal, and his soldiers too. He sends Lak  and the monkeys to disrupt the ceremony. A great battle takes place.  The wounded Intorachit goes back to Longka and bids farewell to his mother. She begs Totsakan to send Sida back to Ram; he refuses.

85. Intorachit is killed. Intorachit's wife and mother bid farewell. Lak and Intorachit launch weapons of mass destruction. Then they fight in single combat. Intorachit hid in a cloud, but Pipek detected him and told Lak where to shoot the Plaiwat arrow. Pipek sends Ongot to heaven to get a diamond bowl from Tada Proh to catch Intorachit's head; otherwise his blood will burn the world. So they caught the head in the bowl and Ram fired an arrow to incinerate it. Totsakan, enraged, decides to kill Sida. 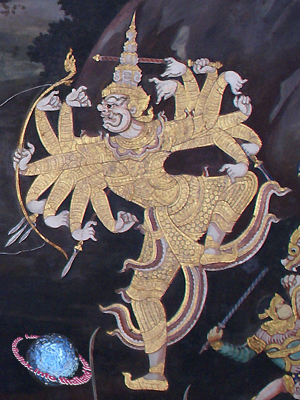 89. Saeng Ahtit, the demon of the sunbeams. Totsakan now calls on Saeng Ahtit to come to his aid, his nephew, who uses a diamond glass as a weapon, which Djitrapairee, his soothsayer, fetches from heaven. Pipek says they should have Ongkot pretend to be that soothsayer and fetch the glass from Tada Prohm. The trick works; when the real Djitrapairee goes to heaven, Prohn has nothing for him. Ram and his army kill them all in battle.

90. Hanuman beheads Treemek. Totsakan himself comes into battle. Ram wins the battle, but Totsakan is still alive at the end of the day. Nang Monto reminded him of Sataloong, ruler of Djakrawan, and also his nephew Treemek, son of Treesian. Ram kills Sataloong instantly, but Treemek escaps to Badan. Kala Nak says he cannot stay there; he tells him to go become a mote of dust on Mount Djakrawan. Hanuman then wraps his tail around Kala Nak until he tells him where Treemek went. Hanuman thus went and killed Treemek and brought his head back to Ram.

91. Totsakan hardens his body. Totsakan again rejects Monto's advice that he return Sida. Totsakan prepares to go engage in protective spells on Mount Nilakala. He has Paowanasoon seal him in a cave so that he can complete the spells. Ram sends Hanuman, Sukreep and Nila Non to disrupt the magic. To move the stone, Hanuman needs dirty water where a demoness has washed her feet, so he went to Benjakai his former lover. Inside the cave, they still cannot break his meditation. Hanuman suggests they go get Monto, and so they bring Monto to the cave and she shouts for help. Totsakan rouses himself to chase the monkeys away, and the spell is broken.

93. Hanuman and Wanarin. Hanuman goes to Akatkiree, and there he is distracted by Wanarin, the heavenly maiden. She is dwelling there under a curse (she let the fire go out when talking with her sister) that a monkey will free her from when Ram conquers Longka. He says he is Hanuman, but she scoffs. He likes her spirit and reveals his true form. They make love, and then he sets off in pursuit of Wiroon Djambang.

94. Hanuman kills Wiroon Djambang. In his flight, Wiroon Djambang had come to Wanarin's cave, and he told her he was going to go live in ocean's foam. He strained the surf until he found the bubble where he was hiding. They fought. Hanuman then used his tail to sweep the sea. He caught Wiroon and smashed him against a cliff. Then he went back to Wanarin, carrying the demon's head. He made love to her again, and then threw her up into heaven. Meanwhile, the effigy had fallen, so Ram knew Hanuman had killed the enemy.


And when I was searching for an image to use of Wiroon Djambang, I found the book ONLINE. The whole thing! Here is a link: Ramakien. I am so glad that I have an online text that I can link to! It's from the "rare books" section of the online library for Chulalongkorn University in Thailand. There are two books on Khon masks here, for example, that could be really useful! 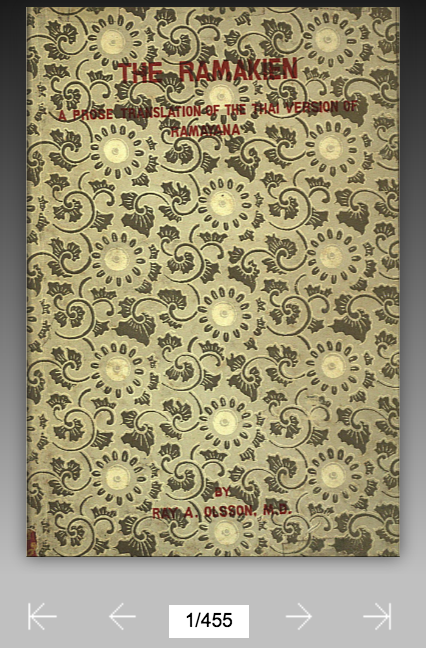