Since I just wrote a story inspired by a Jicarilla Apache legend, I decided to start from the Jicarilla Apache article at Wikipedia. The word "jicarilla" means little basket, so that was fun to know since there is a basket in the story I read. Wikipedia says that they call themselves "Haisndayin," which means "people who came from below," meaning that they are descendants of people who came out from the underworld at the time of creation.

From that article I clicked and went to Flechas Rayada who was a Jicarilla Apache. I learned that his name means "Striped Arrows," and he led his band to victory in the Battle of Cieneguilla. This was a battle in 1854 between the Apaches, possibly with Ute allies, against the U.S. cavalry. The cavalry attacked the Jicarilla Apache near Pilar which was called Cieneguilla at that time, and after a fierce battle lasting several hours, the Apache had routed the cavalry. Kit Carson then guided soldiers in pursuit, and they chased them through the mountains during the winter. Many of the Apache died in the winter weather; the army then caught them at Ojo Caliente. It's a hot springs health resorts, and there is a Tewa legend that its pools lead down into the underworld! 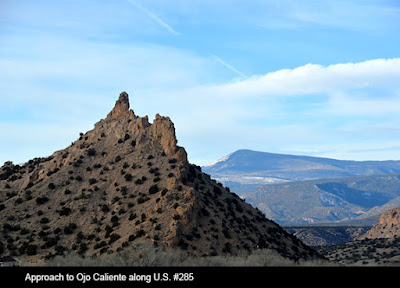 (approach to Ojo Caliente)
Posted by Laura Gibbs at 11:08 AM