I had fun with my work for class this week, but at the same time I have to say that this week was incredibly depressing because of the layoffs at OU (someone I know lost their job). I've been at OU for twenty years, and this is the first time that I have seen people laid off. I've seen hiring freezes, I've seen furloughs, I've seen travel budgets suspended, but I've never seen offices shut down and closed such that people lost their jobs. All that talk about "OU family" is clearly just talk.

In my opinion, if President Gallogly or some other administrator was unhappy with the work being done by an office or a program, they should meet with the people working in that program and help them redefine their goals, setting realistic objectives for what they can accomplish in the coming year. Then, at the end of that year, re-evaluate. Clearly, that is not what happened since President Gallogly has been in office less than a year.

The claim is that the work being done by the Office of Undergraduate Research and the two other research offices that were closed was too "expensive." I've seen so much money, literally millions of dollars, squandered on expensive boondoggles at OU, especially over the past several years, and I can guarantee you that the people squandering all that money were not the people who worked in these three research offices.

If President Gallogly claims that he is going to double the university's research productivity in the next five years (a claim he has made repeatedly), then surely he could have found good and important work for people in these research offices to be doing, but he did not.

I don't know about the details of the other firings, but they make me angry also: if high-paid university executives squander money, and you then fire low-paid landscape workers to pay for those mistakes, that is just wrong in my opinion.

So, I got up this morning in a terrible mood thinking about next week and wondering what else we will learn about the layoffs (I hope there will be some more good reporting from the OU Daily). I'm also worried about how President Gallogly said these are the last layoffs for this "calendar year." Does that mean we are going to get more news like this in January? That's sure what it sounds like. Talk about a way to make everybody feel anxious and worried when they come back from winter break.

But I am glad I had some fun stuff to do for class this morning; I wrote up notes on the Canterbury Tales. I had forgotten how much I love those stories, such a wonderful mix of folktale types all together in one book.

I also started reading a really fun book of math and logic puzzles which is presented as a continuation of 1001 Nights: how cool is that? It is called: The Riddle of Scheherazade: And Other Amazing Puzzles, Ancient and Modern by Raymond M. Smullyan. From his Introduction, I also learned about a Poe story that was new to me: The Thousand-and-Second Tale of Scheherazade (it's online!).

The first of the puzzles is a riddle: What is it that's greater than Allah; the dead eat it; and if the living eat it, they die?

Can you guess the answer? I've written it in white font here, so highlight to see: nothing 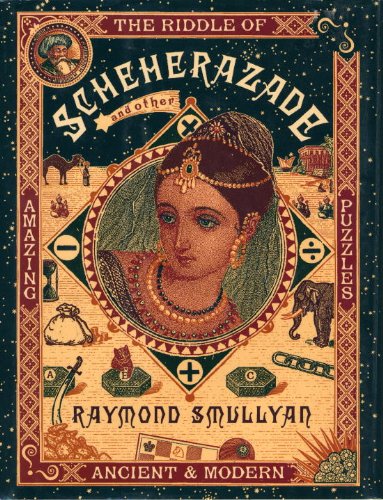