There are so many units in the British and Celtic part of the UnTextbook that do not have notes, and I decided to pick Chaucer's Canterbury Tales for this reading, adding notes to the stories in the "A" part of the unit. I really enjoyed reading these again; I think that Tappan did a wonderful job of retelling the stories in prose. Here are the notes I added to the pages:

The Wife of Bath's Tale: The Unknown Bride

As an aside to the main story which is set in the legendary time of the court of King Arthur, the Wife of Bath includes a digression: the story of King Midas and his donkey's ears (and yes, this is the same King Midas of the famous "Midas touch"). Normally this story is told about the king and his barber, but the Wife of Bath has changed it to be about the king and his queen since that is what suits her purposes here, as you will see. You can compare this story to other stories of this type in other reading units for this class: Ears of Midas. In addition, you can find examples at Dan Ashliman's website: Midas and other folktales of type 782.

There is a big surprise in store for you as you read on to the end of this story, so before you read this next part, ask yourself what you think is going to happen, and see if you can guess the right answer!

The Friar's Tale: The Story of the Summoner

Summoners were agents of the courts of the church ("ecclesiastical courts") who summoned people to come to court when charges were filed against them. Because people were afraid of such charges, summoners could extort money from them, pretending that charges had been brought and accepting a bribe to buy their silence. The story you are about to read is about one such corrupt summoner. The pilgrim telling this story is a friar (this is "The Friar's Tale"), and another one of the pilgrims is a summoner, so you can imagine he is none too happy with this story about his profession.

There is another surprise in store at the end of this tale, based on the bargain that the summoner and the fiend have made together. Can you guess what it is? I don't want to give it away but suffice to say that there is a satisfying sense of "the trickster tricked" by the time you get to the end of this story.

The Franklin's Tale: The Promise of Dorigen

This is the tale told by the franklin, which is more of a social class rather than a profession; you can find out more about medieval franklins at Wikipedia. Unlike the previous stories which involved surprises and tricks, this is instead a romance based on truth and goodness. The story is set in Brittany, which is in modern-day France.

As the franklin tells his story, he will invoke the classical myth of Echo and Narcissus, which you might remember if you read the Ovid unit earlier this semester.


In the story about the summoner, you saw a reference to a juggler as someone who is what we would call a magician or an illusionist, someone who is able to perform sleight-of-hand tricks that appear to defy the laws of nature. This type of juggler-magician will be an important character in this next episode of the franklin's tale.

Remember how I told you that this was going to be a story about truth? Strangely enough, the magician's deception is going to cause a crisis of truth for Dorigen and her husband Arviragus.

The power of truth is absolute in this story, as you will see in the end. Again, no spoilers, but I will share with you the last line of the story because it is a kind of philosophical or ethical riddle, so you can keep this in mind as you read the story's conclusion: "Now of these three generous men, which one was the most generous?"

(If you read the unit of the Twenty-Two Goblins, you will see that this type of riddling story is a popular folktale type.)

The Pardoner's Tale: The Revelers

This tale is told by the pilgrim who is a pardoner, i.e. a church official whose job was to sell indulgences for the forgiveness of sins. You can find out more about indulgences at Wikipedia. This pardoner promises to tell a story that will provide a positive example, and his theme is a line from the Bible: Radix malorum est cupiditas, "Greed is the root of evils."

Things are going to take an unexpected turn in this part of the story: although the three revelers are seeking Death in order to kill him, they are going to find something quite unexpected, and highly desirable, instead. 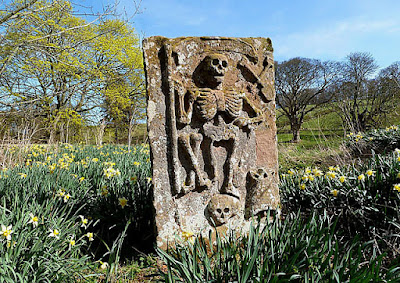