This semester will be similar in a lot of ways to what I did for Myth-Folklore last semester, but also different because of the reading. In Myth-Folklore, I did the regular reading with the rest of the class, and that made sense because it had been quite a few years before I put the UnTextbook together and I was also looking at the stories in a new way thanks to my chain-tale project.

With Indian Epics, I've got a different idea: I am going to read the Thai version of the Ramayana! To make that work, I will actually do Ramakien reading in Week 2 (but I'll also read the Anthology in order to write a story), so it should work out that I can finish the whole Ramakien before we start the Mahabharata in Week 6. I am so excited about this: I know bits and pieces of the Ramakien, but I have never read the whole thing! 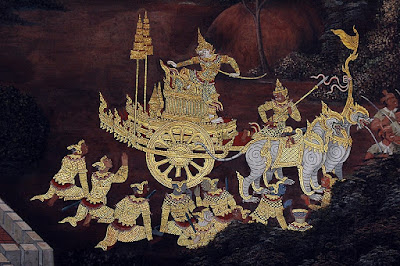 (Ramakien: Hanuman on his chariot)

Then when we get to the Mahabharata in Week 6, what I am doing to do is re-read Chitra's Palace of Illusions which is 8 parts: 6AB, 7AB, 8C, 9ABC. Then I'll be able to read Chitra's Forest of Enchantment as the reading for the final part of the semester. My copy of Forest of Enchantment is on the way, and hopefully by the end of the semester the Kindle might even be available!

I'll have the same problem I had last semester in that I can't really do the project feedback assignments during Weeks 6-15, but with all the extra reading assignments plus other extra credit, I can make that up, no problem.

I'm so excited to be doing Hanuman stories; I'm not sure if I will find a way to work Hanuman into the Week 2 storytelling, but I'll figure out about that when I read the Anthology again and write a story for Week 2.

Reading the Ramakien is something I've always wanted to do, and I am especially inspired by all the great Flickr photos I found showing the events of the Ramakien at Wat Phananchoeng, Ayutthaya: Flickr Album by Anandajoti Bhikkhu. 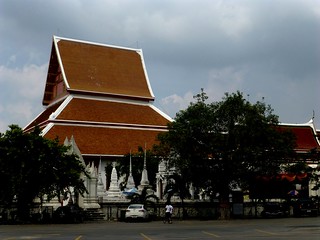 Here is what I need to read:

Week 2A: Part A
1. The giant Hiran rolls up the tapestry fo the Earth
2. Ayutaya, city of the gods is founded
3. Longka, city of the demons is built
4. Atchaban kills the demon Asura Prohm
5. Saha Maliwan leaves the Underworld
6. The downfall of Treeburam
7. The demon nontok with the diamond finger
8. The youth of Totsakan
9. Pipek, the seer, is born
10. The childless Kodom conjures a wife
11. Kodom's sons are changed to monkeys
12. The birth of Hanuman
13. The thunder god Ramasoon chases the lightning of Mekhala
14. Kakat and Sukreep set the heavenly mountain aright
15. A toad becomes a beautiful maiden
16. The battle of the snakes and the demons

Week 3 extra: Part E
60. Totsakan's nightmares
61. Sukasarn comes as a spy to the monkey camp
62. Totsakan the spy
63. Benjakai changes herself into Nang Sida
64. Hanuman and Nilapat quarrel
65. Hanuman begets a son of a mermaid
66. The first battle on the island of Longka
67. Ongkot goes to Longka as a messenger
68. Sukreep destroys the umbrella of Longka
69. Maiyarap kidnaps Pra Ram
70. Hanuman breaks into the Underworld
71. Hanuman frees Pra Ram and kills Maiyarap

Week 5B: Part J
115. Asuraphad offers to find his father
116. Longka is recaptured
117. Anuchit and Nila Non threaten Maliwan
118. Suriyapop is defeated
119. Banlaiyadjak is killed
120. Nonyupak wishes to fight
121. Waitan of the palm club
122. Djakrawat plunges into a fight to the death
123. The victors return home
124. Nang Sida draws a picture of Totsakan