Introduction to a Colearning Teacher/Student

Hi everybody! This is my Introduction post for Spring 2019... and yes, it's me, Laura, your teacher, who is also going to be a student in the Spring 2019 Indian Epics class. I hope that does not seem too weird! In the Fall, I took the Myth-Folklore class, and I had so much fun doing that. I did all the blog posts (Fall 2018 archive) and I also did a project for the class: Chain Tale Anthology. It was really exciting for me to see things from a student perspective, and I also learned a lot... so I am taking the Indian Epics class this semester as a student too.

To be honest, I don't know if I am ready to be back in school yet... the break seemed short. Really short. TOO SHORT, ha ha.

I spent Christmas with my dad, who is on hospice care (he has lung cancer), so that was pretty intense, but he had a great time for the holidays. We listened to lots of Christmas music (for him, music is the best medicine! seriously!), and I made a huge playlist of Christmas music for him, with lots of jazz and Big Band songs. Here is one of my favorite songs from that playlist; it's the Pentatonix version of White Winter Hymnal:


And because I'm a Latin nerd, here's a version of that same song in Latin (yes, I used to teach Latin long ago, and I still love all things Latin):


I'll be going back to visit my dad a few times during the semester; there's no predicting the course of his lung cancer, so I feel really lucky that I have this online teaching job that allows me to go to Texas when needed. For more about my life divided between Texas, Oklahoma, and North Carolina, check out my intro post from last semester: Being in Two Places at Once.

Spring Break update. We had a beautiful musical breakthrough while I was at my dad's over Spring Break: I got him a xylophone! And he's loving it. For all that music has been a big part of his life he had never ever learned to play an instrument. So, it's never too late to learn music: he's learning to play the xylophone at 91! I wrote about that at my other blog: Digital Resources and Analog Music.

Over winter break, I also started a new project that I am really excited about: Brer Rabbit Stories. I was thinking a lot about Brer Rabbit and Anansi and other trickster stories last semester, and then when school was out, the first book I picked up to read was Chase's huge collection of all the Brer Rabbit tales published by Joel Chandler Harris. As I read the stories, I realized that this would be the ideal way to study something of real interest to me, which is the intersection of African and Native American storytelling. 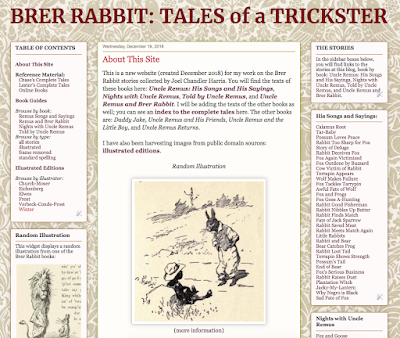 I'm starting on the African side (since the large majority of Brer Rabbit stories come from African sources, via storytellers brought as slaves to the Americas), and then after I finish learning about the African sources, I will start looking at the Native American storytelling traditions that are part of the Brer Rabbit tradition also. I'm having so much fun with that, although I probably won't have a lot of time until summer to work on it. Even so, I got a lot done over the holiday break... plus I ordered tons of used books for learning more about African and African-American stories; even if I just find an hour each day to do that reading, I am going to be learning a lot. I also got a Brer Rabbit poster to put on my wall; it's the original book cover of Nights with Uncle Remus: 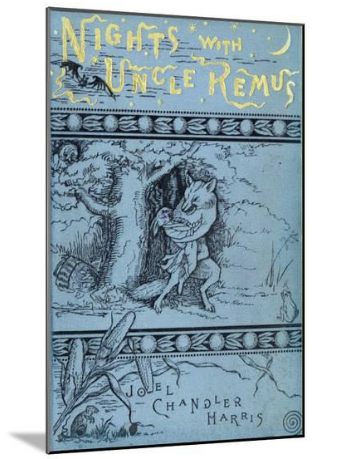 (Nights with Uncle Remus at AllPosters)


Meanwhile, for this class, I am pretty sure I want to do a project about Hanuman, mostly because I really (REALLY) want to learn the words to the Hanuman Chalisa by heart. There are lots of versions of the Hanuman Chalisa that you can find online; one of my favorites is this version by Girish:


Project Update: So, I did end up doing my project about Hanuman, but not based on the Hanuman Chalisa. Instead, I got totally obsessed with the Ramayana as told in Thailand, where it is known as the Ramakien, so those are the Hanuman stories I ended up writing about in my Storybook: Hanuman in the Ramakien. :-)