Horses Divine: I really like the way a focus on horses in this project allows for a combination of both Buddhist and Hindu stories. Hayagriva is in here, the horse-headed incarnation of Vishnu, plus a really cool retelling of the Buddhist jataka about the shipwrecked sailors and the man-eating rakshasis. I'm pretty sure I want to do a Hanuman project this semester, but it would also be so much fun to do an animal-centered project that could include both Hindu and Buddhist stories, like maybe one about turtles, which could include Vishnu's turtle-avatar, Kurma.


To Love and Lose: Hidimbi's Story. This was one of my favorite projects last semester. I'm a fan of the traditional fairy-tale-like version of Bhima and Hidimbi's romance, but this project showed me a totally different way of imagining their relationship, with Bhima as a heartless villain and Hidimbi as a woman (rakshasi) scorned. She ends up in a role something like Thataka, fighting together with her sons against their human enemy, Bhima this time, not Rama.


Post Secret Sanskrit: The Panchakanya. This is an old project, and I'm afraid all those "classic" Google Sites are going to go offline later this year or in early 2020... I will miss them! The real Post Secret at PostSecret.com is an amazing storytelling project (, and this project has Post-Secret-style postcards to go with each story. It is a beautiful storytelling style, and perfect for all the drama in the lives of the Panchakanya, the "Five Ladies" of Indian legend.

For example, check out this intense one for Tara: My husband doesn't know that I had sex with his brother while he was away at war. I thought he was dead.

How intense is that??? It really conveys the total emotional drama of the whole Sugriva-Vali-Tara triangle. 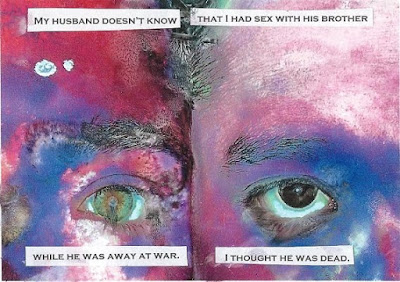