124. Nang Sida draws a picture of Totsakan. This is so intense! A ghost demon woman named Adoon morphs into a young woman and becomes Sita's maid, and tricks her into drawing a portrait of Totsakan which cannot be erased and which burns under Rama's bed. Enraged, Rama orders Lak to take Sida into the forest and kill her.

125. Pra Lak tries to kill Nang Sida. What a painful scene! Sida finally begs Lak to kill her to save himself, but his sword turns into a garland that proves her innocence. Indra takes pity and brings a dead deer to Lak, and Lak brings back its heart, and Rama shouts, "This heart is not that of a human. I have lost my manly honor to an animal who did not love me!"

126. Nang Sida's sons are born. Indra takes the form of a Buffalo King and comforts Sida, leading her to Watchamaruk. She gives birth to a baby. One day she went to bathe and left the baby with the hermit; monkeys told her she was being careless, and terrified she ran back to get the baby. She went and got him, and when Watchmaruk awoke and saw he was gone, he conjured another baby from the fire. Sida asks him to go ahead and do it, giving her boy, Mongkut, a companion, who is Lop.

128. The children fetter Anuchit. Rama heard the noise of the shattered tree, and sends out Hanuman to defeat whatever enemy it might portend. Prot and Satrud from Kaiyaket go with Hanuman. Meanwhile Mongkut and Lop find the horse Upakan and dare to ride it. Hanuman discovered them, but they were able to capture and bind him. They wrote on his forehead "No one but his master may loosen these bonds." Hanuman was ashamed, and had to go back to Rama for help. 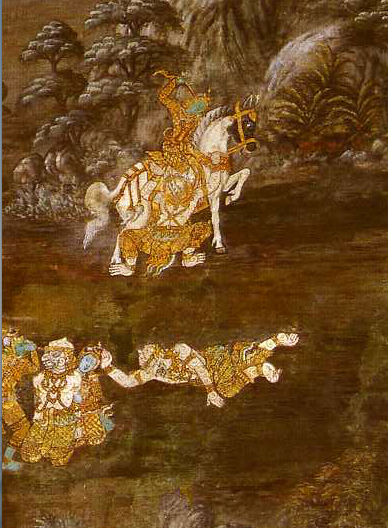 (the horse and binding of Hanuman)

129. Pra Mongkut is captured. Prot and Satrud confront Mongkot; Hanuman now manages to capture him but Lop escapes. Sida gives Lop a ring to smuggle to Mongkot in prison. Indra sends Rampa to pretend to be maiden bringing jar of water to Mongkot, so he escapes.

130. Pra Ram recognizes his sons. Ram goes out in pursuit and fights Mongkot and Lop, amazed at their powers. He demands to know who they are, and they demand first to know who he is, so he tells them his story. Mongkot realizes this is his father, and decides to punish him for driving his mother into exile. Lak confesses. Mongkot is adamant that they want nothing to do with Rama.

131. Pra Ram finds Nang Sida. Rama and his party chase after the boys and find Sida. She hides in the hut and Rama begs her to come out. "She half loved and half hated him." She finally lets him in but is still furious. They argue. He then begs her to let him have the boys. He hopes she will come if he has the boys. Finally, she agrees to let the boys go.

132. Nang Sida flees into the womb of Mother Earth. Sida will not go to the city, so Ram sends Hanuman to go and trick her by saying Rama had died of grief, bringing her to the city for the funeral. Sita rode on Hanuman back to the city, feeling sad, and Rama then leaps out from under the urn. She is furious that he tricked her. She summons mother earth to take her underground, and Rama sends Hanuman into the Underworld to bring her back; he fails (no details given!). Pipek comes and tells Rama about Adoon, and advises the King to spend 12 months in exile, promising him that Sida will then return to him.

133. A new fight with the demons. The demon Treepagkan attacks them in the wilderness, but Hanuman subdues him and explains that he is fighting Pra Narai. Treepagkan is defiant, so Lake shoots him with an arrow. His father Kuwenurat wants revenge, and Ram kills him with the Krut arrow. Then they meet the demon Kumpanurat, a demon cursed by Isuan for flirting with Rachanee in heaven; Hanuman fights with him. Then, pardoned by Rama he flies to heaven, again in his angel form, Sunontewet. The dragon-eagle demon Wayupak swoops down on Ram and Lak, but the monkeys led by Hanuman and Sukreep rescue them.

134. Anurat is wounded and buried in a cave. The monkeys fight the demon Anurat, but cannot kill him. The hermit Kosop Rusee explains to Rama that the way to kill him is with a bullrush thrust into his heart. Hanuman pounds the bullrush into Anurat's body and they put the corpse in a cave guarded by a rooster with a fish in its mouth, and a hammer in the fish's mouth. If the demon awakes, the rooster must crow and the fish must hammer the bullrush with the hammer. "It would be a billion years before the demon would be able to get free." This was Rama's last heroic act during the year of self-imposed exile.

135. Pra Isuan reconciles Nang Sida with Pra Ram. Indra and Isuan decide to reconcile the couple. Listening to them both, Isuan says that half of the blame goes to Adoon, but the rest goes to Rama. He asks Sida to forgive him, but she is still afraid of him. Isuan assures her Ram will not do that again, so she goes hom with Ram.

136. Kontanurat captures Kaiyaket. Demon Kontanurat and his son Wiroon Pat attack city of Kaiyaket, but the king will not surrender. Kaiyaket flees to hermit Kowin in forest. Rama sends Prot and Satrud plus Mongkut and Lop, and Hanuman and Sukreep also send monkey troops. Kontanurat refuses peace and vows to fight.

137. Pra Lop and Pra Mongkut enter the demon war. The small boys fight heroically in the battle to defeat the demon army of Kontanurat and Wiroon Pat.

138. Joy and gladness in the world. Prot tells King Kaiyaket that his great-grandsons Mongkut and Lop helped defeat the demons so that he could return to his city, where Prot and Satrud again rule. Everyone lives happily ever after.