So, this past week was weird and depressing and not what I expected... plus it was also the busiest week of the semester, so no surprise there: I didn't get any schoolwork done as a student this past week because I was swamped with work, and then life also. The big stressor was having to cancel my Spring Break trip to Austin; I was so broken up about what to do so I decided to let my dad's hospice nurse decide, and she said not to come because it was just too risky with my dad's condition already so compromised. And then a couple days later they actually canceled SXSW in Austin, so that made me feel like it really was the right decision even though I also feel terrible about it.

The unexpected upside is that for the first time in years I have an actual Spring Break that is a break, not a trip to Austin. But I doubt we'll go anywhere; I was thinking we might run off to the beach or mountains for a few days but now with the corona thing, ugh, I really don't know what we'll do. Luckily we can just do something spur of the moment if we do decide to go somewhere... in the meantime, I can get back on track with my student work for class over break too!

And in other news... I got to vote for Warren in the primary, but now she's out. I am heartbroken. Just imagine: this woman could have been our president!


In yet other news... some schools are already canceling f2f classes and moving to online. I wonder if OU will have to do anything like that?! There's been a flurry of activity at Twitter, and I decided to chip in by writing up a kind of guide to blogging at Blogging.LauraGibbs.net. I decided to work on that this weekend, get as much done as I can, and call that my contribution to the online resources that so many people are generously contributing at Twitter. GO, EDU-TWITTER! :-)

And I'll add: GO, ELIZABETH WARREN! I wish you were going to be our president......... but the Senate sure needs you too! 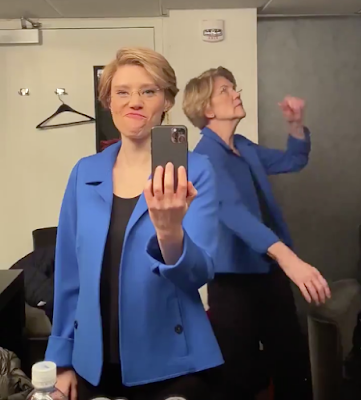