When doing this course as a student, I always have to figure out how to do the reading, since I've read both Narayan and the PDE options for the Ramayana. Last time I did the class, I focused on the Uttara Kanda, and the year before that I read the Thai Ramakien, etc.
This semester, I've decided it might be really useful to systematically explore Devdutt Pattanaik's archive of essays online at his site, Devdutt.com, and write about the Ramayana materials there (and then I can do the same for the Mahabharata materials and the Krishna materials later). Devdutt always collects so many great legends from beyond the Sanskrit versions of the epics, that's what I want to summarize and link to in my reading posts this semester.
So, I'll start with this link, and just see what I find! I'll comment on the articles in the order that I find them in the Google search: Ramayana site:devdutt.com
How do you tell a story like the Ramayana?
I find the idea that Valmiki might have written the Ramayana as a counter-Buddhist narrative: "Buddhism anchored itself on the narrative of a prince who walks away from family responsibilities to become a sage, while Ramayana speaks of a prince who is forced to leave his home to uphold family responsibility..."
I'm also impressed by this double move in response to Islam: the rise of the book AND the rise of Rama-as-God: "In these works, Ram is not just avatar of God; he is God..."
Here are some of the stories that take shape during this time; any one of these would make a good story to write about this week: "Lakshman-rekha, Lakshman’s wife Urmila, Shabari’s berries, Ratnakar’s transformation into Valmiki, Sita probably being Ravana’s daughter, Sita probably being a form of Kali, Hanuman being a form of Shiva, pilgrim spots associated with the Ramayana, Shiva being the true fountainhead of the tale that is passed on to Valmiki..."
And I really like how at the end here, Devdutt gives a sense of what he is trying to do when he tells Ramayana stories: "You try to show how Ramayana is not about an ideal king/hero/God, but is also about a wise queen/heroine/Goddess. It is not so much an exemplary tale as it is a cautionary one, about the burden of rules, and its toll on the love of a boy called Ram for a girl called Sita."
Bridging the many interpretations of the Ramayana across Southeast Asia and India: Buddhism.
This piece starts out with Rama in Thailand! quote "In those days, long before British Orientalists and the colonial divide-and-rule policy, no one distinguished between Buddhism and Hinduism. Ram was as much a hero for Buddhists of Southeast Asia as he was for the Hindus of South Asia." Including that iconic idea of Hanuman as the bridge, just as in the jataka! YES! "We see Hanuman stretching himself, from the edge of a broken bridge to the shores of Lanka, enabling Ram on his horse-driven chariot and Ram’s grand monkey army to cross the sea effortlessly. This story is not found in the Ramayana that Indians are familiar with. And it vaguely reminds us of the Jataka story in which monkeys escaped the king’s hunters by running across the back of the monkey-king who stretched himself between two trees." And I love this idea of the Indian ships' sails being the backdrop of the puppet theater tradition: "the ship’s cloth sails illuminated by lamps inspired the storytellers to create the art of shadow leather puppet theatre, which explains why shadow puppetry thrived along the Coromandel sea coasts and across most of Southeast Asia, as Ravan-chhaya in Odisha and Wayang in Indonesia." Devdutt mentions the stories of Suvarnamaccha and Benkaya too! Reading all this is really making me way to reread the Ramakien... I wish there were accessible English versions of Kakawin Ramayana and Hikayat Seri Rama, and I am very grateful to scholars like Devdutt who share information, even just general observations, about the Ramayanas of South Asia.
(I'm skipping the Ramayana-Mahabharata historical dating one to do later with the Mahabharata items)
Hanuman’s Ramayana.
I love this story, so maybe it is one I will retell for this week! Valmiki finishes his Ramayana, but then Narada tells Valmiki that Hanuman composed a Ramayana. There is not a lot of detail here at Devdutt's blog post, but I actually have this book on my bookshelf! Hanuman's Ramayana by Devdutt Pattanaik. So maybe for my B reading this week, I will read this book, write notes, and use that for this week's story. 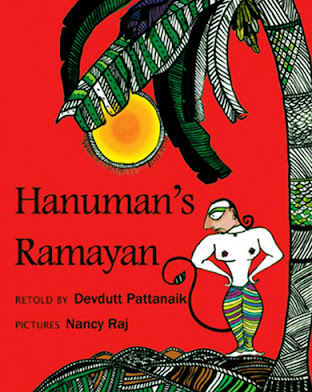