It felt really weird to see that my last post here was just 10 days ago because it feels like forever. So much happened. I added a story here on Thursday of Week 0 (early start to the classes), and that same night my father died. It was expected... but still: it was not expected at that moment; no one knew when the end would come and when I would get that phone call. But it was absolutely and completely peaceful, and also a hospice miracle. He was diagnosed with advanced lung cancer in October of 2017, and the oncologist did radiation therapy to reduce the tumor. They called it "palliative radiation," but it just about killed him; he went on hospice in January of 2018, and they gave him just a week or two to live.

But instead: he lived for another two and a half years. What was killing him, it turned out, was not the radiation (although that had really weakened him) or even the cancer... what was killing him was malnutrition, dehydration, and loneliness (he had been alone at home since my mother died in 2015).

So, thanks to Hospice, he managed to make his exit while being at home (he was not hospitalized even once during this whole ordeal), and without any pain either (which is definitely miraculous). This past Wednesday, August 26, would have been his 93rd birthday.

Anyway, it means the start of this school year is even more not-normal than usual. I feel really grateful that I have classes to distract me. There's a ton of paperwork and practical stuff to take care of, but all of that is going to be slow because of COVID. Yep. He died in Austin, and the funeral home explained that COVID has caused such a backlog that I might not get the death certificate for weeks. The lawyer said the same: all the court proceedings related to estate probate are backed up so that this is all going to take way longer than usual.

And now, I thought I'd say something here about how this all relates to this class.

For Christmas last year, I wanted to give him a nice present but I really couldn't think of anything to get him... so I wrote him a book! I used National Novel-Writing Month (NaNoWriMo) to write a book that I published at Lulu and took to him at Christmas. He loves jokes, so I made a collection of Nasruddin and Birbal stories for him; they are folktales that have a lot in common with jokes. Here's that book: Witty Tales of Nasruddin and Birbal. 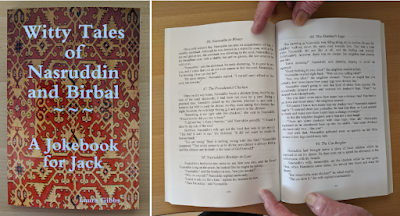 Some of the stories were really short, and some were longer (a page or maybe two pages). By that point, he was getting confused, and reading the longer stories was hard for him, but he loves to read (and to write; he published his last book when he was 90! Science and Sociology), and the very short stories worked great. So I bought him some books of "drabbles" (100-word stories): mystery, science fiction, horror. I hadn't even realized how popular 100-word stories are! He really liked those: perfect for his attention span.

I also tried writing my own 100-word stories, and it was so much fun! My goal was to make a book of 100-word stories for my dad's birthday since he liked the Christmas present so much. Plus I just loved writing these tiny stories; I've never found a genre of writing that suited me so well.

Then the pandemic came, and I couldn't go to Austin anymore. I used to go to Austin every month or so, but for Spring Break, his hospice nurse told me it was too dangerous to come; I blogged about that here.

So, since I couldn't go to Austin anymore, I needed some way to connect with my dad at a distance. He's really deaf, which meant phone calls didn't work. So I started texting jokes every day to his caregivers, and they would show him the jokes on their phones, and I started writing LOTS of these 100-word stories. My goal was to create a book of 100-word stories every month during the summer (the last one being for his birthday in August).

So, that is what I did! The first one was the Nasruddin book; here's a picture his caregiver sent to me when he got that one back in June. 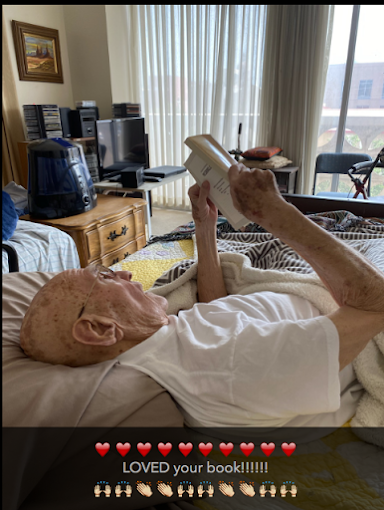 The very last one arrived about a week before he died. He was staying mostly in bed at that point, but he told his caregiver that he wanted to get out of bed and get dressed and go sit in his reading chair so she could take a picture to send to me of him with the book. So she sent me this picture; that's him with the Teaching Guide book that came at the end after the Nasruddin, India, and Aesop books. 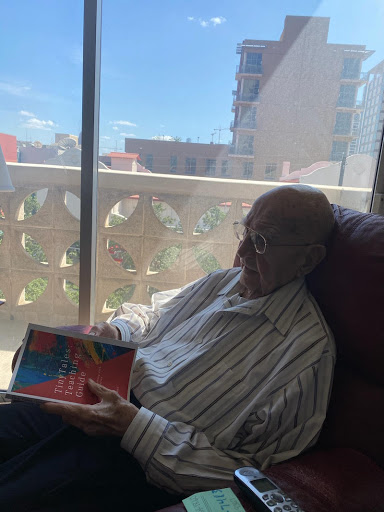 So, that's the last picture I have of my dad, and it makes me feel really happy that we were connected through the summer books that I wrote for him.

This turned out to be a longer post than I expected, but I felt like trying to write all this down... and now you can see how the 100-word story I wrote for my previous post at this blog is connected to my real life too (even though it took way more than 100 words to explain it...).